Who Is Sri Agastya Maharishi?

Sri Agastya (sometimes written Agathiyar or Agasti) is the principle among the Saptarishi. The Saptarishi are 7 very important spiritual masters from the vedic period in India.

They authored the palm leaf manuscripts, contributed to medicine, astrology, grammar, even martial arts, and composed many important texts.

Given that Sri Agastya holds such an esteemed place not only in the history of India and within many of its various spiritual traditions, but also as one of the primary and most prolific palm leaf manuscript authors. We felt it not only important but wholly necessary to create a post about his life and his impact on our world.

The Miraculous Birth of Sri Agastya.

Sri Agastya was also known as Kurumuni, which means ‘short saint’ due to his “dwarf-like” stature.

There are a couple of legends surrounding the apparently miraculous birth of the great maharishi Agastya. Some state that the Gods Agni and Vayu had been cursed by Indra, king of the Gods, to be born as humans. (Apparently, this is what happens when you disobey a God!)

Thus Agni was born as the sage Sri Agastya and Vayu was born as another important sage, Vasishta.

Another story tells that while the gods Mitra and Varuna were performing a yajna (Vedic ‘sacrifice’ or fire ceremony) an Apsara (female water spirit) named Urvashi appeared. She was so beautiful that the two Gods were overcome with sexual energy and both ejaculated into a clay pot. Out of this pot, the master Agastya was born.

Being born from this pot earned him the name Kumbhasambhava (literally born from a pot).

Sometimes, the sage Agastya is considered an incarnation of Lord Shiva himself.

The Gifted Life of the Great Maharishi.

As is a common theme in the early lives of many great sages, Agastya showed an aptitude for the study of scripture and a strong spiritual disposition from a young age.

Later in life, Sri Agastya traveled widely in India and across Asia. His legacy is strong throughout Asia especially in the south of India in the areas of Kerala and Tamil Nadu. He is also well known in Sri Lanka and Java, Indonesia where statues of him can be found in temples, and an 11th-century copy of his important text, Agastyaparva still survives.

Agastya married the daughter of an unwilling king from the kingdom of Vidharbha. Lopamudra, herself a great sage, initially agreed to join the aesthetic lifestyle of the sage, but later demanded that he provide her with basic comforts, such as a bed and shelter.

This demand forced Agastya out of his forest aestheticism and into the world to earn money and provide for his wife.

Agastya and Lopamudra had a child named Drdhasyu, who is known to have learned the Vedas while still in the womb. This incredible feat was accomplished by listening to his parents chanting the sacred hymns of the Vedas.

Miracles and Legends of the Great Sage Agastya

Kartikeya was Shiva’s son. He got very angry and wanted to go away from his father. He went down south in great anger and became a warrior. In many ways, he was an unmatched warrior who went about conquering. He did not conquer to rule. He went about slaughtering whatever he thought was unjust – because he felt his parents had been unjust to him, and he wanted to create justice. When you are angry, everything feels unjust. He felt there was so much injustice in the world, so he fought many battles and found a lot of people to slaughter.

It was Agastya who made Kartikeya’s anger into a means for enlightenment, and finally, he found his rest in Subramanya. He washed his sword at Subramanya for the last time, settled down there for some time, and then moved up Kumara Parvat where he attained Mahasamadhi in a standing posture. This great art of transforming Kartikeya’s anger into a means for his enlightenment was Agastya’s work.

Even the Vindhyachal mountains were no match for the Sri Agastya

When Agastya was going down south, he met Vindhyachal. Vindhyas is a mountain range in India that is much older than the Himalayas. Among the mountains, Himalaya was elected as the King of the mountains. So, when Agastya was going down south, Vindhyachal was angry and he stopped Agastya and said, “How can you make Himalaya the king? He is just a child compared to me.”

Now Agastya knew that when a man gets angry it can be pretty bad; when a mountain gets angry, we do not know what he will do. When Agastya sat down, because Vindhyachal was very devout, he bowed down to Agastya. So, Agastya said, “Just stay there. I will go down south and come back; then we will look at your issue.” So, Vindhyachal remained bowed down, waiting for Agastya to come back. Agastya never came back. Next time when he came north, he went the other way through Jagannath, Puri, just to avoid Vindhyachal, so that he remains subdued. Vindhyachal is small because he is bowed down. Himalaya is tall because he is standing up and still growing.

The Great Sages Impact and Legacy

The reverence offered to Agastya Maharishi

Sri Agastya is mentioned in very many ancient texts. Including, but not limited to:

The Legacy of the Great Siddha Agastya

Besides being guest featured in a great many spiritual texts and sources, Sri Agastya Maharishi also authored many texts and helped develop and pioneer many traditions.

Author of the Palm Leaf Manuscripts and Nadi Astrology Predictions

Nadi astrology, also known as Agastya Nadi (when the leaves were composed by Sri Agastya), is a series of future predictions of the lives of many many thousands of human beings. 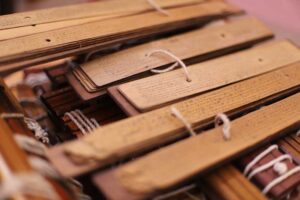 These predictions were written by scribes on palm leaf manuscripts. These manuscripts were then stored in a network of libraries across rural India. These leaves have been waiting for centuries to be discovered by the person whose life stories they contain.

These leaves contain intricate information about the person’s previous life karma, current life situation, and the likely outcomes of the person’s life. Of course, these are just predictions, and they are not set in stone.

If the person takes up the practice of the remedies prescribed in the final chapter, the karmic situation of the person’s life can be directly addressed. The negative stores of karma can be harmonized or balanced

To learn more about the remedies in Nadi astrology check out this wonderful post on Working With Your Palm Leaf Reading.